Vanilla Chai White Russian is an easy fall cocktail that is a cozy take on the classic. Homemade vanilla chai infused vodka, sweet coffee liqueur, and velvety cream are poured over ice in to a spicy chai sugar rimmed glass. 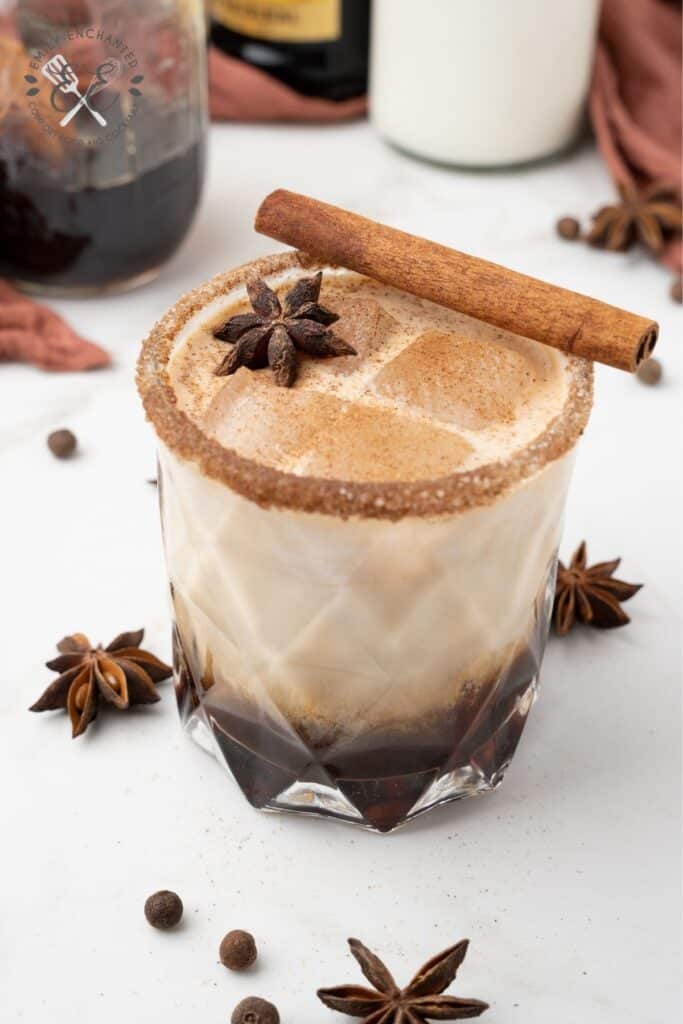 To make this white russian recipe, you will need the following ingredients (see the recipe card below for exact amounts): 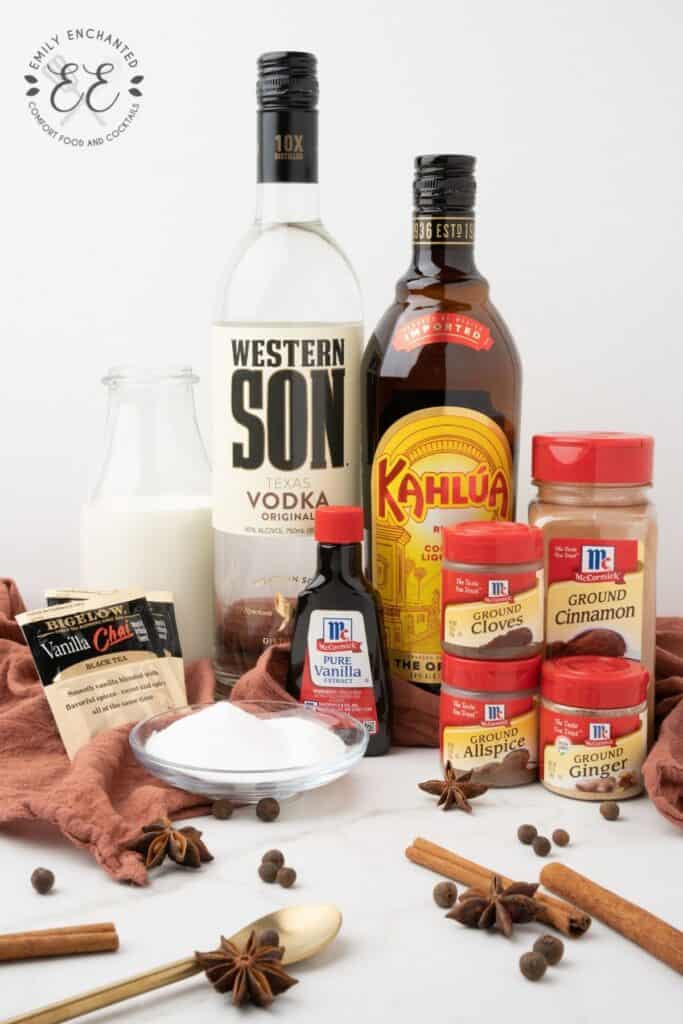 This recipe makes enough vodka for 4 cocktails. Just repeat the next steps to make additional cocktails.

Pour 8-ounces of vodka into a watertight, resealable container. I like to use canning jars since they seal well and many even have measurement markings right on them. Place the tea bags in the jar under the surface of the vodka, making sure to drape the string and label over the top of and down the outside of the jar. Add vanilla extract. Replace lid tightly and give the jar a good shake. Infuse the vodka for 2 hours, coming back to shake its contents every 30 minutes, or so.

When the vodka is fully infused, remove the tea bags and squeeze any excess vodka back into the jar, taking care not to tear the bags. Discard used tea bags and store in the refrigerator until ready to use.

In a small, shallow plate, combine sugar, ground cinnamon, ground allspice, ground ginger, and ground cloves. Dip the top of a glass into water and shake off any excess to leave just damp. Dip the rim into the chai-sugar mixture, assuring all of the rim is covered. Allow spiced rim to set-up for a minute or so before filling.

Fill your prepared/rimmed glass to the top with ice. Over the ice, pour coffee liqueur. Shake the jar of infused vodka to mix-in any sediment then pour 2-ounces over the ice followed by the heavy whipping cream. You can leave the drink layered or stir to mix, depending on your preference.

If you desire, sprinkle some of the chai-sugar on top and garnish with a cinnamon stick and/or a star anise pod. Serve immediately. 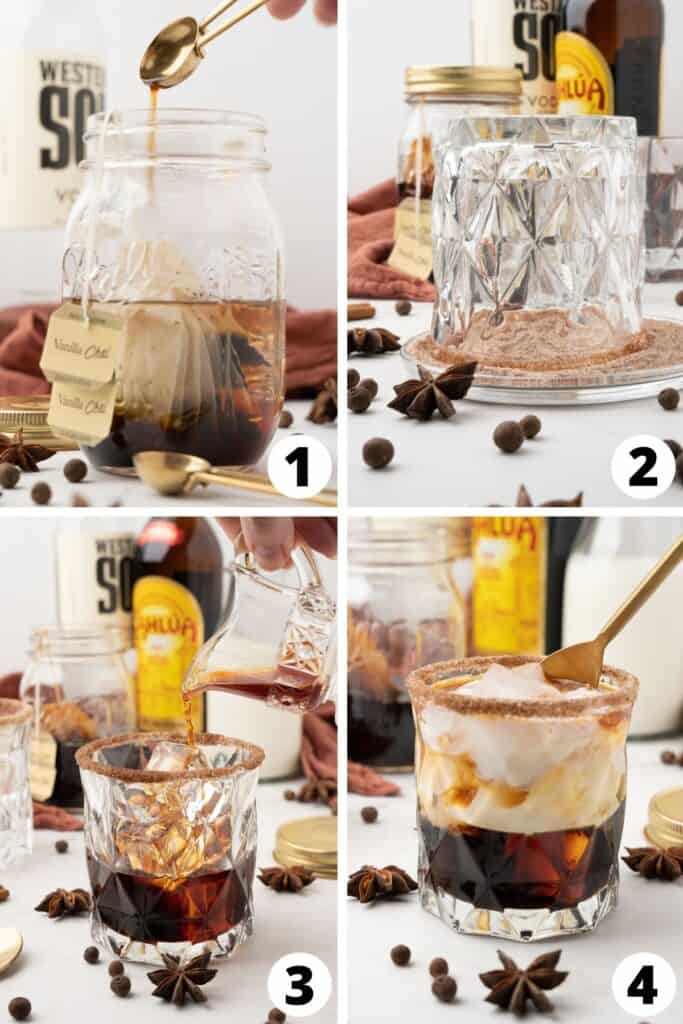 How Long Can I Store the Infused Vodka?

While the Vanilla Chai White Russian is best enjoyed right away, the vanilla chai infused vodka can be stored in a cool, dark place for up to 1 month. Feel free to make a larger batch using 1 tea bag of chai for every 2 ounces of vodka.

What if I can’t find vanilla chai tea bags?

If you don’t have vanilla chai tea, you can use regular chai tea bags and just add another teaspoon or two of vanilla extract to the vodka infusion. Another option would be to infuse the chai into vanilla flavored vodka, though flavored vodkas tend to be sweetened and usually have a lower alcohol content. 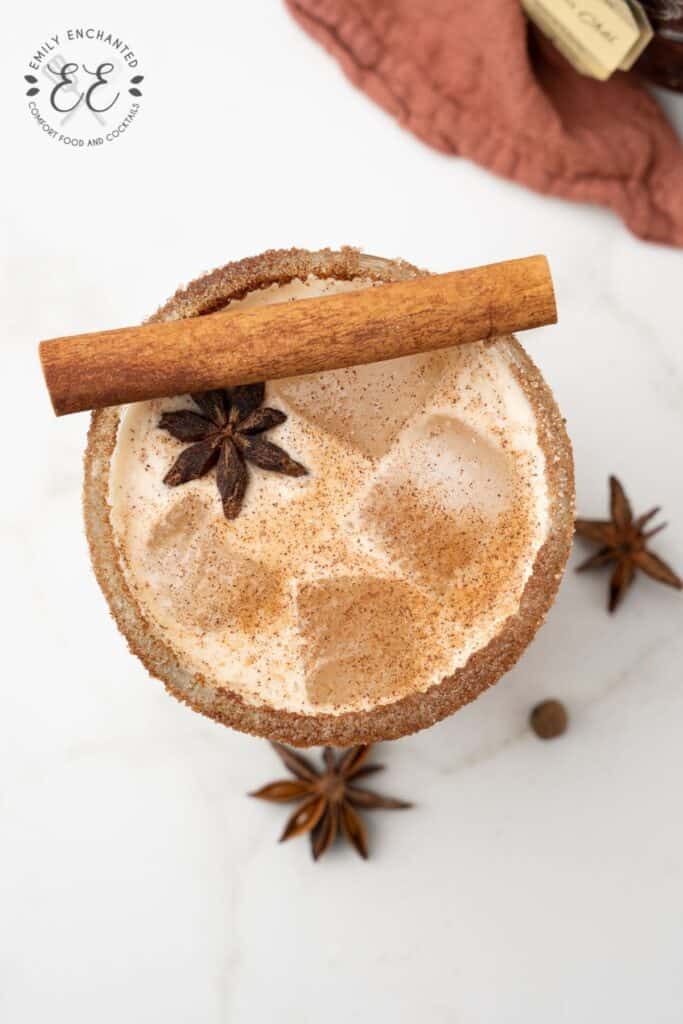 Can I substitute milk or half-and-half for the heavy whipping cream?

White Russians are traditionally made with heavy whipping cream but you can absolutely trade out milk or a lower-fat cream such as half-and-half in this recipe. Keep in mind, though, that a lower fat content makes for a thinner consistency.

Can I use a dairy-free milk substitute?

Full-fat coconut cream is a delicious dairy-free substitute for heavy whipping cream and stays relatively true to its original texture.

For the Vanilla Chai Infused Vodka:

For the Chai Sugar Rim:

For a Vanilla Chai White Russian: